Not sure I really have time for blogging with only a month to go till BOYL and a worryingly large paint queue to tackle but I had to post an update on my now complete Rhinoman regiment! 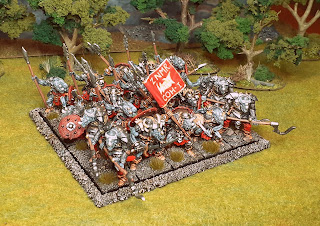 If you haven't already seen my Work in Progress post on them you can find it here. Anyhow, here they are, sporting the distinctive red and black uniform worn by Zharradan Marr's legionaries and formed up in the pike square that proved so effective at the Battle of Trolltooth Pass. A combination of Thugruff's skill (and brutality) as a Drillmaster and the use of the Regimental Musician to issue simple commands to change formation has turned these normally recalcitrant and slow-witted creatures in to a well drilled and formidable force. 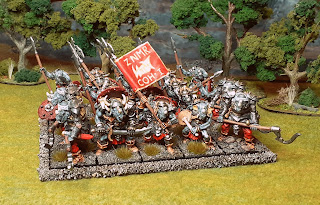 A little background about Rhinomen may be of interest to those uninitiated in the world of Fighting Fantasy. The following excerpt is taken from Out Of The Pit - Jackson, Livingstone, ed. by Gascoigne.

"The Rhino-men of the Southern Plains are thought to be the sorry remnants of evil experiments by a mad sorcerer many centuries ago. They are huge, bulky humanoids, resembling a cross between a rhinoceros and a human. 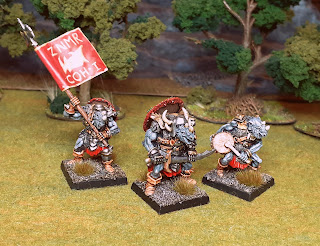 Their heads are large, with a huge horn of matted hair projecting from their foreheads. Their skin hangs in folds, and is tougher than leather armour.

If encountered in the wild (a fairly rare occurrence as they are not a common species) they will usually be on the trail of game, and carrying crude spears and knives. Some Rhino-men, however, may be found serving as guards and soldiers for an evil leader, in which case they will be carrying better weapons and may be wearing the livery of their master.

They don't make particularly good soldiers, for they are surly and clumsy, but their strength serves them in good stead in a fight." 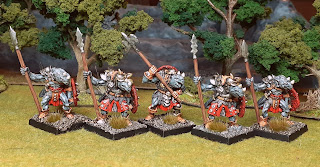 So all in all, I'm very happy with how they've turned out and they look suitably imposing when ranked up with the Black Elf regiment and the mixed regiment of Dwarves, Gorians, Kobolds, Craggeracks and Goblins I've also got painted up - more of which later!

Marr's legions are slowly taking shape and I now have all the modelling and assembling done for the army - except the Galleykeep. That will be a treat I shall save till I've got all the rank and file painted...
Posted by Thantsants at 16:15