Wow - another year and another BOYL and they still keep getting better! It is genuinely an event that gives me a lump in my throat as I drive home wishing it wasn't all over for another 365 days.

This year was busy as ever and as you can see from the group photos Orlygg kindly posted up on Facebook, possibly the busiest yet! 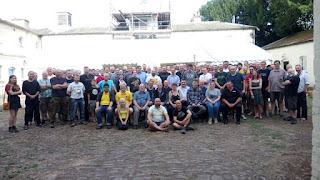 For posterity I've included pics of the previous years - pinched off Facebook so thanks to the various photographers who have taken this now iconic shot each year. It's amazing how the event has grown I must say!

There have been plenty of reviews and overviews of the event so far and they're well worth a read - especially for me as yet again I had my head down gaming all weekend and didn't see much else other than the stuff I was directly involved with: Realm of Chaos 80's; Lead Rising; Give 'Em Lead; Lead Plague; Magpie and Old Lead; Scale Creep (a spectator's view!); Shadowkings and a very good guide on how to go about BOYL at the Lead Pile.

That being said, I'll concentrate on the games I played and first up on the Friday was the next instalment of my and Warlord Paul's extremely slowburn Trolltooth Wars campaign! For a quick refresher of what we planned all the way back in 2013 check Paul's blog post out here.

Last year we played Zharradan Marr's revenge attack on one of Balthus Dire's Hillgoblin tribe villages. This was in retailiation for Dire's Hillgoblins mistakenly attacking one of Marr's caravans and making off with the extremely valuable and mystical herb, Cunnelwort. BOYL 2015 of course saw the commencement of hostilities with that fateful raid on the caravan.

This year Paul had the pleasure of working out how to get this lot in miniature form on to the table and as you'll see from the pictures of the game, he did an admirable job. Dire's raiding party consists of the usual Hill Goblins and Orcs along with more exotic Chaotics like the Giant Spider and Fly monsters, two headed armoured Giants armed with scythes and a Hell Demon!

For those of you unfamiliar with the events of the Trolltooth Wars, Coven is the legitimate face of Zharradan Marr's evil underground empire. The villagers of Coven provide the food necessary to supply Marr's legionaries, ignorant of Zharradan's dungeon complex that lies literally beneath their feet - an easy target for Balthus Dire's attempts to knock Marr out of the war at an early stage.

So my prep for the game was relatively easy - I just had to provide enough peasants to keep Paul's monsters fed...


Well as was to be expected I lost! But I had an awesome time losing - in fact it was one of the most entertaining defeats I've had in a long time and in fact it wasn't all doom and gloom. As this is a linked set of scenarios leading up to the climactic battle of Trolltooth Pass, each game has consequences. As I lost over 100 villagers, the Coven militia won't be turning up at the final battle. However, the plucky peasants did manage to badly wound most of the fly creatures, kill several Orcs and one of the Chaos spawn, meaning that their ranks will also be slightly diminished as well!

It looks like we'll be aiming to play the final battle for Trolltooth Pass at next year's BOYL and hopefully get in some of the preliminary skirmishes that take place as Marr's legionaries attempt to blockade Dire's army up on the Craggen Rock before now and then.

Hopefully I'll be a bit more organised and use my time more wisely - I have most of the stuff ready to  paint but still need to source the Rhinomen legionaries, Marr's flying galleon - the Galleykeep as well as its escort of Blood Orcs mounted on Tooki - a Griffin-like creature! I also feel that we should be making some scenery to represent the Trolltooth Pass as its geography does have quite some bearing on the course of the battle. Paul has the pleasurable task of painting up 37 Hill Goblin tribes - probably a good job that we agreed on scaling numbers back on a 1:20 ration to make the game more manageable!
Posted by Thantsants at 15:29