So despite having various mini-projects to do and even some bigger ones that have been painted but not featured on here yet, it appears my brain wants to do something entirely different. This coupled with another furious bout of decorating and much of my hobby stuff buried under huge piles of other stuff, while we try to get the house sorted as much as possible with the current building work, means that embarking on an entirely new project seems like just the thing to do... 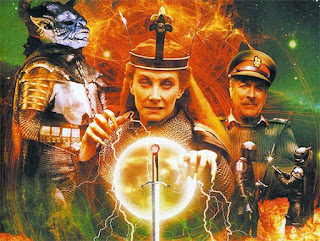 Yes, I have become completely obsessed with reproducing in 28mm, or thereabouts, the Seventh Doctor's first story of his final season, Battlefield.
Admittedly this is an idea I've had for a while, although revisiting much of Classic Who during my furlough, thanks to Britbox making it available to stream, seems to have set me off on this project once more. 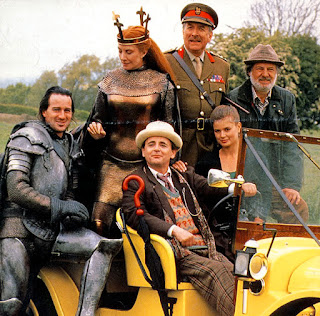 The past weeks have involved some serious obsessing over some pretty minor details of a Who story that, it has to be said, is not regarded as one of the best. When I say obsessing really I mean it - you don't know how long and hard I have searched for a 1:43 or similar scale Nissan Patrol to use as Bambera's vehicle after tracking down its identity on this very useful site! No success so far but more on that later as the project progresses. Lockdown lunacy perhaps or am something far more sinister - a descent in to scale modelling...! 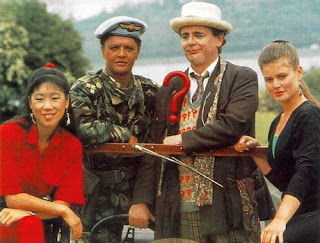 Why am I doing this? So far it's involved a fair financial investment in miniatures and model cars (and some of the scale model kits I'm looking at are looking fairly costly too).  I'm not even sure I'll ever get around to playing the scenario unless I take it to BOYL once things have cleared up a bit. The story, as I've already stated, definitely has its detractors too. 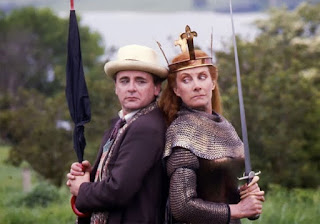 Well, I guess that I just really love Battlefield! I have very fond memories of watching this story on the telly as a kid (McCoy was my Doctor when I was growing up) and I still find it truly entertaining as an adult, despite certain flaws. It's also nice to back doing some Dr Who - some of you may recognise or know where the title of this blog comes from and the original focus was painting Black Tree Dr Who minis as well as resurrecting my old Citadel miniatures collection. 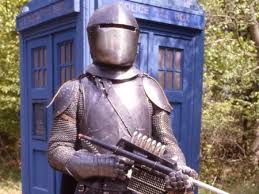 If you're not familiar with the story here's a short synopsis - the Doctor lands on Earth after receiving a distress signal and finds himself embroiled in a war between futuristic Arthurian knights from a different dimension. Both sides recognise him as Merlin, though the Doctor doesn't know why, postulating it may be down to something he will do in the future. Throw in a very multi-national UNIT and a stranded nuclear missile convoy in to the mix, along with Nicholas Courtney's final appearance as the Brigadier and you've got yourself a potentially excellent adventure. 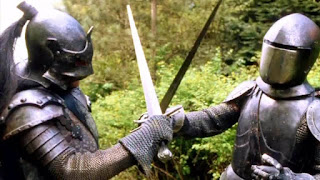 As mentioned, the story does have its critics. A large cast who don't always have enough to do, terrible music, story lines that aren't explained or developed, or are sometimes just plain forgotten about, oh and some rather ropey sword fights too! The story was obviously too ambitious for the resources that were available at the time but, in my opinion, it still manages to be genuinely entertaining, even if it falls a little short from what was intended!

There are some great new characters introduced to the Whoniverse - Brigadier Bambera and Knight Commander Ancelyn make a great pair. Jean Marsh is also excellent as Morgaine, portraying a nicely nuanced villain for a change - and of course Nicholas Courtney is always great value for money in his last performance of his role of the original Brigadier. 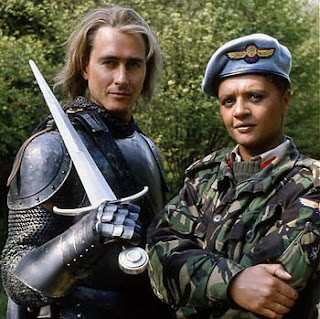 Although it's a bit cheesy, it's also nice to see the Doctor sticking around at the end of a story and enjoying the fruits of his victory for once, rather than sneaking off due to his dislike of goodbyes as is usually his want! The end scene always raises a smile in me with its cosy domesticity. 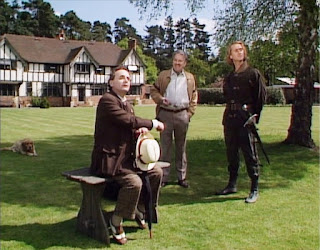 The other main draw to Battlefield as a project is that it is easily transferred to the gaming table. We have clearly defined sides who seem fairly evenly matched, along with various objectives like the nuclear missile convoy or racing against time to stop the Destroyer. Oh and then there's Bambera hanging out of the sunroof of a 2CV, blasting away with her F88 Austeyr rifle - something I just had to recreate in miniature form! 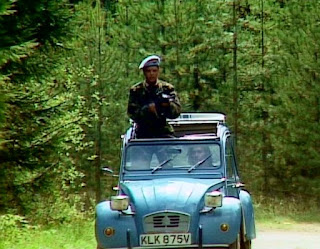 In fact this is where the project started really and is some way towards being completed... 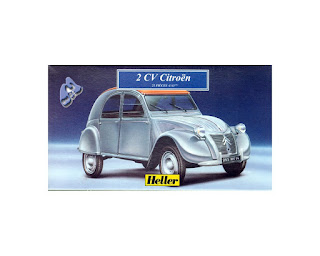 Progress so far is a slightly converted Heller Citreon 2CV in 1:43 scale, a WW2 driver from Dixon miniatures with a head swap from the Perry WOR Footknight Command sprue for Ancelyn and one of Foundry's Street Violence Backstreet Militia minis with a head swap from Anvil Industries. I'll do a more in depth post on this later once it's painted.

Sourcing the miniatures has been fun so far and after getting stuck in to converting a lot of the miniatures for my Trolltooth project last year, I'm feeling well prepared to try and get as close to the look of the characters from the show.
Ral Partha has been a great source for lookalikes and base miniatures for further conversion. This chap will do for Mordred, Morgaine's villainous son. 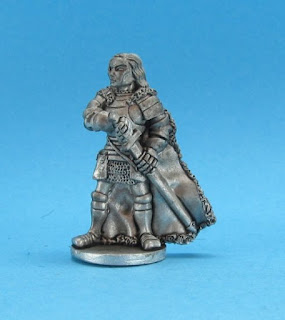 I thought Torquemada, the Chaos Conqueror, would make for a nice helmeted version of Mordred, being a very close match with the Sallet helmet, cape and sword held aloft, although shields don't seem to feature amongst Morgaine's army's equipment at all. However, he turned out to be a bit on the small side - much closer to 25mm than 28mm. I may mount him on a built up base and see what he looks like or he may find employment in another project in the future as I already have a good mini for Mordred. 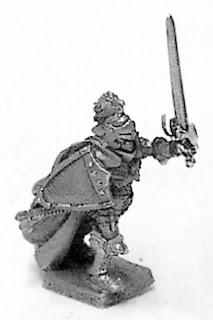 This fighter in plate mail makes for a good armoured Ancelyn without his helmet on. As the character goes through various costume changes throughout the story, I've decided to convert several miniatures to represent this, especially as he seems to spend much of his time sporting a rather natty Brigadine. 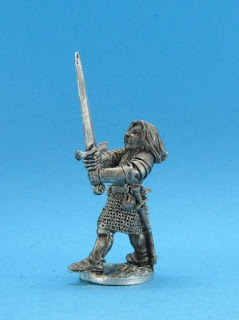 The following chaps are all from various Ral Partha ranges that looked a good match for Morgaine's knights. However, the shields were bothering me and they didn't look so easy to convert in to realistic shooting postures. 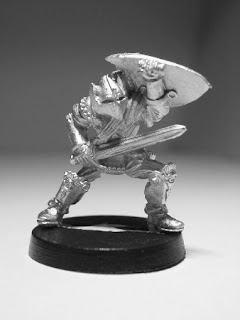 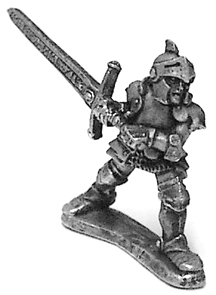 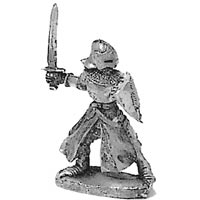 Instead I turned to the various medieval plastic sprues that Perry Miniatures produce having spotted more heads that would be a good match, wearing both closed face Barbutes for the Men-at-Arms and Sallets for the Knights. This would also give me lots of other useful bits for conversions. 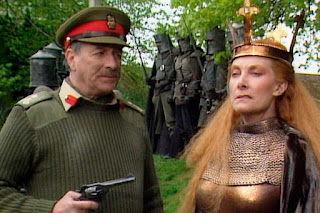 A few pieces from Anvil Industries like alternative heads, arms, capes and top knots also help me get a bit closer to the look of the costumes from the show, along with some nice ray guns from Crooked Dice. 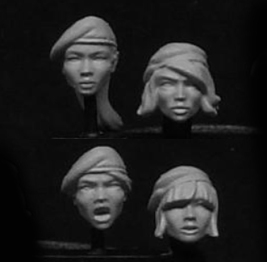 Unit is looking a bit more modern in Battlefield and much more comprehensively equipped than in previous episodes so it was time to turn to Gripping Beast and their lovely Falkland British troops from the Mo Fo range.

Anvil Industries contributed some great head swaps for the conversion for Bambera and some of Foundry's Street Violence miniatures donated their F88 Austeyr rifles - a weapon surprisingly tricky to track down in miniature form! Pictures to come once I have her painted up.
Unit's Nuclear Convoy is another important part of the story, although it's never explained just why they are dragging a nuclear missile around the country side! Unfortunately suitable scale models of mobile missile launchers don't seem to exist in 1:43 scale and those in 1:35 seem to retail for £80 and upwards which is a little on the expensive side for me, impressive as they would be when built. The 1:35 Chinese DF Ballistic Missile Launcher from Trumpeter caught my eye though, as did its price point of around £50 from some sources. I'm still a little hesitant of dropping that amount of cash on a model which might be a little large when scaled with 28mm miniatures. It does look fairly similar to the vehicle used in the show though. 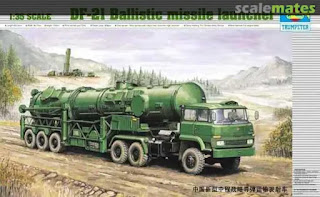 I kind of fell in love a little bit when I happened across this next model though - the Renwal 1:32 Terracruzer with Mace Missile! It's an even larger scale than the DF BML, which is the main problem, and being an older 1960's era American nuclear missile launcher, it doesn't really fit with a 1980's style UNIT outfit. Mind you UNIT isn't exactly the most uniform of military organisations and it is such a great model I'm tempted to get it just to build and paint it for the sake of it! I'm not convinced by the winged missile but the Terracruzer that transports it is an amazing vehicle. I'm a Land Rover enthusiast and love off road driving and that thing looks like it'd be a ton of fun to get behind the wheel! The other bonus is that I've seen it going for a much more affordable £35 or so. I'll have to think a bit more on this one and come back to it later in the project... 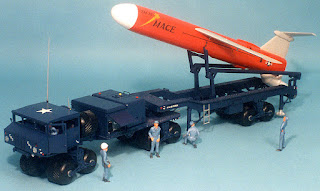 There's also the matter of the rest of the convoy which consists of various DAF YA 328's, Volvo TL 22's and DAF 2800's. I've got my eye on some Dinky Bedfords if I can get some cheap off ebay that are in need of some restoration. Alternatively Butlers Printed Models does some rather nice 28mm Bedfords, Stalwarts (for those amphibious operations) and even a lovely little Land Rover 101 Forward Control - a truck I'd love to own in 1:1 scale! 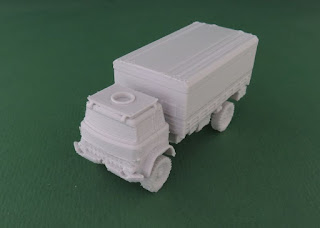 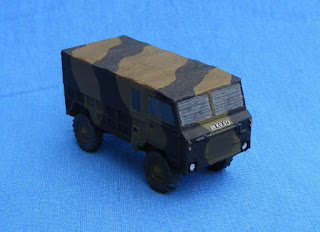 Their German LARS could also be a potential candidate for the nuclear missile transporter with a little conversion work on the multi barrel rocket launchers to make them look more like a long tange ballistic missile launcher... 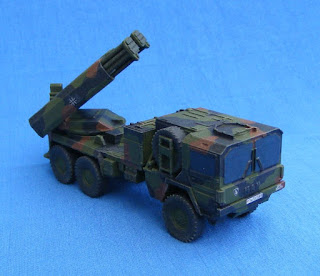 Well I think that's just about it in terms of what models I intend to use. I've got a fair bit of converting to do to assemble twenty four or so Men-at-Arms and their six Knight superiors that I want to field. There's also a few of the key Black Tree Dr Who characters to finish off painting so watch this space! Any suggestions as per the scales of the models I've been looking at are most welcome as are any other suggestions as to what to use for the nuclear missile transporter!