There are more ways of skinning a cat...

... You could just try Miliput and leave the poor animal alone! 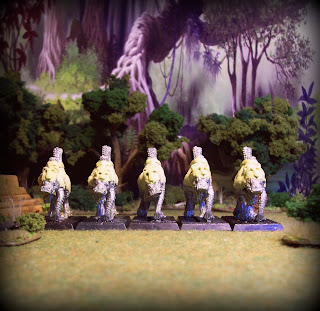 Ever since I saw this pic in the Armies book...

.. I knew that I wanted some Slann. Now that I have some I knew I wanted some Cold One Riders. With Jaguar pelts adorning their scaly backs.

So with the help of some great modelling and sculpting sites (sorry can't remember which now!), the additional pics of this fine specimen from Paul Benson's collection showcased in White Dwarf 98's 'Eavy Metal section, a load of miliput, my trusty Citadel modelling knife and a dried up biro, I set to work.

I started off by rolling out the miliput into thin sheets - talcum powder and a plastic sheet are your friends here. Then came the bit that caused me no small amount of trepidation - draping and cutting the miliput sheets into a vague jaguar pelt shape onto the Cold Ones. They didn't look too promising at this stage and I hoped I hadn't just plastered my lovely lizards with putty. However, after a bit of a going over with my old GW stippling brush (a Christmas present I never used for its intended purpose as the bristles were far too stiff to achieve the effects I wanted) the pelts began to look a bit more pelt-like - fur is a very forgiving subject matter! 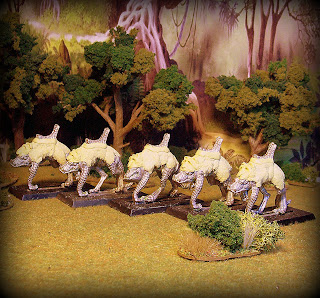 Then this evening, once the pelts had dried, I came to the tricky bit - sculpting the jaguar heads.

Sometimes you should just dive in and give it a go. My giant's toenails had come out ok, although big cat heads were a slightly different kettle of fish...

Actually they turned out to be quite easy - shame I didn't think to take any progress shots, although  I'm sure some professional sculptor or other sickeningly talented person has created a tutorial somewhere on the interwebz.

First step was a roughly shaped blob to give the basic impression of the head. I used my knife to flatten out the jowls of the mouth and then rolled a tiny sausage that was slightly thicker and flat-ended at one end. This was to become the bridge and nose of the Jaguar once I had blended it into the rest of the face. A few flicks of the knife gave the nose a little definition along with the split in the lips where they meet the nose - whatever the scientific name for that part o f a cat's facial anatomy is called? 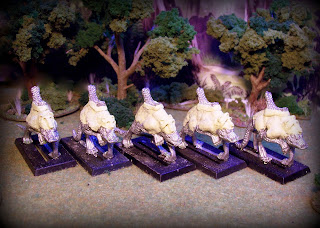 After that I rolled a slightly thicker and longer sausage and draped it over the top of the bridge of the nose to form what I thought of as the brow ridge - again anatomical names fail me! From here it was a case of messing around, bending it round and blending it in to form the cheekbones and eye recesses - the biro came in handy here.

Finally I rolled out a very small ball of putty, cut it in half and positioned and sculpted the two halves to form the ears. A little light stippling - so as not to squash all my hard work - lent a little texture and covered up the rough bits and voila!

Although I'm no Jes Goodwin by any stretch of the imagination, I'm rather happy with the results, especially as these are my first real attempts at sculpting anything and I kind of made it up as I went along. 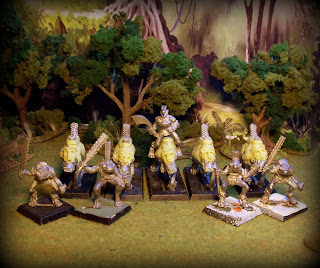 Only problem now is that, as well as finishing off my standard bearer with a banner top, I'm going to have to tart up the riders with feathered headgear, spears and other accoutrements after all that...

Any suggestions on making such things would be appreciated!
Posted by Thantsants at 16:46