Good morning all and the stock take continues - this time its one of my newer collections, the Old World Alliance. Having had a blast assembling the Linden Way Militia for Orc's Drift and for a long time regarded these ranges with envious eyes, I finally succumbed and have amassed a small force of assorted Empire, Bretonnian and Tilean troops. I thought about including my Norse contingent here but figured they'd probably want a bit of the limelight to themselves.

Still got a long way to go with this army before I achieve this! 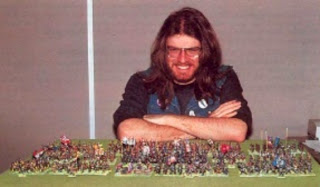 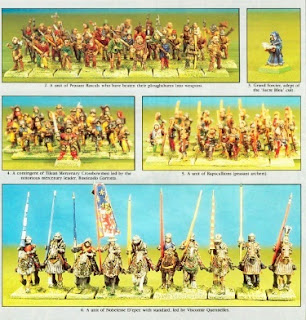 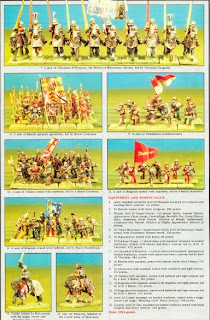 First off we have a unit of Chevaliers Rampants, including the army general. Not sure whether these chaps are citadel or not but I love 'em, even more so as they were a bit of an ebay bargain, coming in at about £1.30 a mini! The General type fellow with helm in hand has a passing resemblance to Dave Andrews' Grand Marshall, pictured above. Any ideas from you lot? 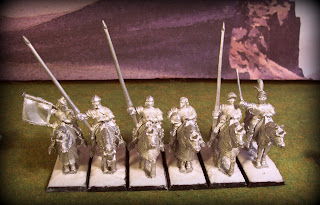 While we're on knights, here's some from the Empire this time. Not as much of a bargain as the Chevaliers Rampants, these are another bunch of minis I haven't yet identified. They have wolf pelt capes and look very similar in design to the Knights Panther coming up shortly. They were billed as being 80's citadel on ebay but I'm not sure - happy with them either way though. They'll be fielded as Hohensknechtes and I'll probably push the wolf theme by procuring a 90's White Wolf knight as their champion to round the unit out at 5 minis. I'll also be looking out for some of the 90's plastic barded warhorses for them. It was nice to get the old plastic horses with this lot and I know horses vary a lot in size in real life, but they do tower over the all metal Chevaliers Rampants. Strangely bucking the usual case of GW scale creep, the later barded warhorses are a much better match size-wise. 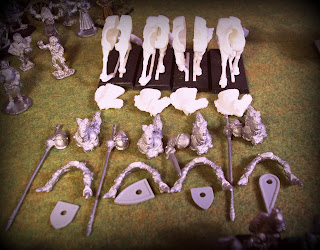 My thanks to Blue in VT for these Knights Panthers - I do have a soft spot for a lot of the 90's Empire stuff, even if it did beat the pants off my Orcs on a regular basis back in the day!

This lot will also be needing barded warhorses and a leader - I would love to try and recreate the famous John Blanche painting for their champion. 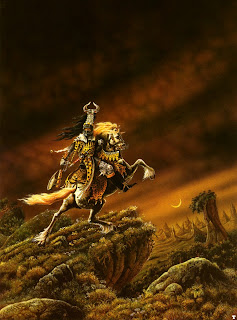 Foot knights now - and I think I'll be fielding this lot as Hohensknechtes again, minus the horses of course. Reiksgard don't really seem to fit into the idea of a small, mixed and possibly Mercenary force. This unit is complete apart from a little conversion work to make a standard bearer. 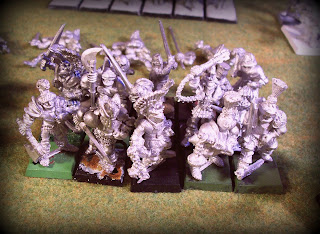 Men at Arms next, and a 20 strong unit of mixed Helblitzen, Ribalds and Brigands. These will form the core of the professional soldiery for this force. Again just need to either find a standard bearer or convert one. I'd love a musician too but may have to look in the 90's Empire range as there seems to be a strange dearth of standard bearer and musicians sculpted for the Dogs of War/Fighters ranges. 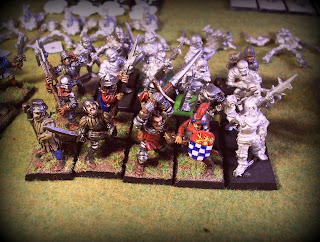 A bit lower down the pecking order is the militia - bit of a way to go with these guys as I'd like a large unit of 30 and possibly a second unit as cannon fodder! 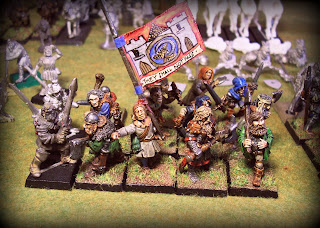 I am well provisioned with missile units with 15 Bretonnian Arblastier 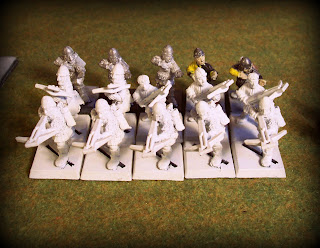 11 Tilean Crossbowmen - would like to expand this unit a bit to possibly 20 of these all metal/single piece sculpts and get some pavises for them. 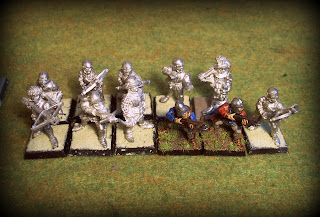 20 Forstjaeger (Forresters) formed up into a unit in the pic, and 10 Bergjaeger (Scouts) in skirmish formation in the foreground. Nice mix of old Citadel historicals/Foundry bowmen and later sculpts. Got quite a few of the Rangers and wouldn't mind a full set at some point... 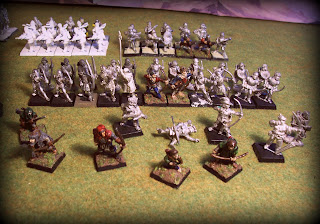 And not forgetting L'ordonnance! One four man Bombard and an allied Dwarf Organ gun (until I get hold of a few more cannon!)

Best take along some wizards - Gandalf doing a little bit of moonlighting and a lovely old preslotta who will be a lower level adept, still learning the ropes by the look of his pose! 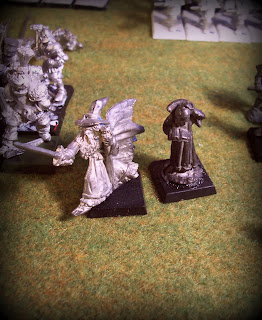 Finally one of my favourite features of 3rd ed, armies - the baggage train! I knew those wagons, pack mules and villagers from Orc's Drift would come in handy one day. I've also added in some bard types, old beggars, strumpets, drunkards and other sundry hangers-on with a mix of citadel and other manufacturers - again any ID's would be great on the non citadel stuff. 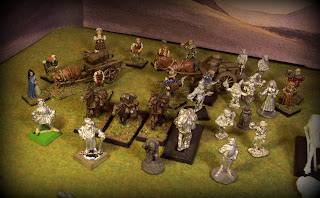 I'm itching to do something with this lot so I'll have to be quite disciplined if I'm going to get anywhere with my Lustrian project. Might give myself a little treat now and again though ;)