Orc's Drift: Into the Maelstrom...

"Sir, the Orcs have reached the East wall - our archers need reinforcing. There's more of them approaching from the North!"

Brommedir looked coolly at Aydendorn before giving his measured response,

"It is only a feint, dear boy. I anticipate the main attack to fall upon Chardz's Engineers at the North entrance. I trust he has suitably fortified his position and it is secure. We shall remain here. We have the hospital at our back and command the compound from our redoubt."

Aydendorn looked dubiously at the flames that were now hungrily devouring the hospital's roof. Ominous creaks and groans warned of the timber supports approaching their breaking point.

"Besides, our comrades have been ordered to fallback on my signal. Our piper knows the call..."

The two Elves looked round for their regimental musician as slowly the realisation dawned...

From the East wall came a strangled and desperate whistling and just over the roar of the Orcish battle cry came a faint,

The Orc charge crashed home and yet the Elves stood firm and gave them one last volley before drawing swords. In the confusion of combat neither side managed to land a telling blow but the weight of Orc numbers forced the Elves back from the wall. Backed into a corner with the burning hospital behind them, the Elves made ready to sell their lives dearly. 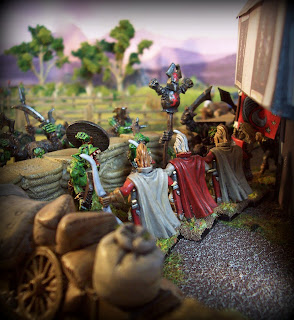 The sappers had finished preparing the defensive ditches, and as no archers came streaming back from the outer wall as expected they happily hunkered down there, hefting their picks and mattocks in readiness. 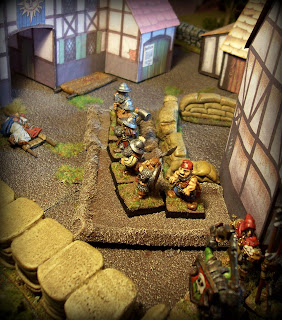 Chardz had been contemplating their position. Unhappy that the mealie bag wall they had thrown up was sufficient, he ordered his sappers back to also dig ditches in front of the redoubt and the waiting Elf archers. 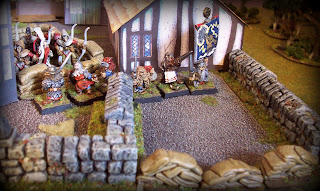 With the renewed strength lent to them by desperation, the Elves fought back against the Kwae Karr who had broken through. One Orc fell to their assault, the others unable to penetrate the wall of blades put up by the archers. 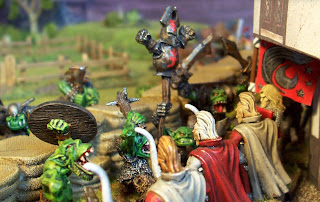 Much was the cursing and swearing that darkened the air above Snart. Despite having the horse and ox under his magical control, it was still a struggle to coax them around to the right direction. Eventually the small party looked as though it were ready to leave and not a moment too soon. 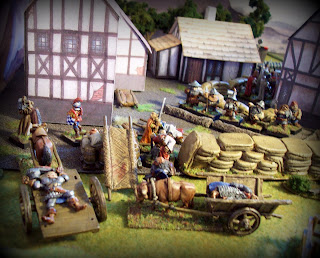 The perilous sounding creaks issuing from the stricken hospital began to grow and crescendo. With a great crash the entire structure folded in on itself, sending out great clouds of sparks, ash and smoke. The Kwae Karr archers, who had just peppered it with another volley of flaming arrows, whooped with joy at the destruction they had caused. Bagrash also smiled, as he rubbed his smoking finger having unleashed another fireball in the same direction. 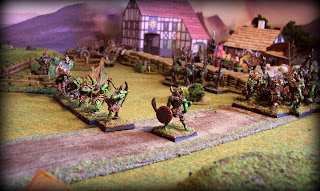 The call was echoed by the rest of the Orc horde as it continued to lap around the walls of Orc's Drift in hungry waves. 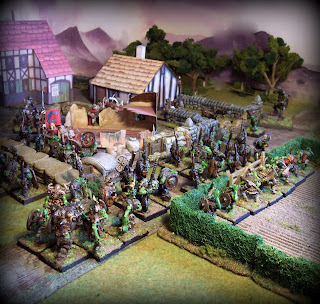 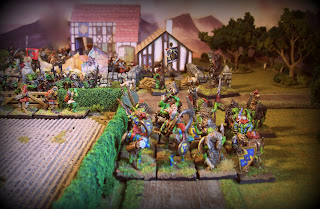 While Grashak Kra's hounds leapt the barricade and made for the Dwarfs busily digging beyond it, closely followed by the long-legged and, by now, completely ravenous Guthrum Mane! 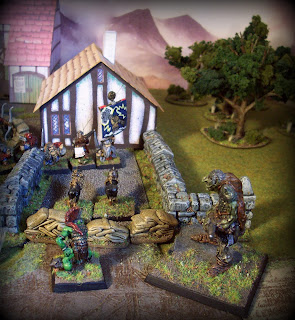 Magyar laid about him in a terrible rage, incensed at the Elves rebuff to his charge. One of the archers fell to his onslaught and a few of his Orc warriors got a good cuffing for their lacklustre efforts. They were over the wall, but found themselves locked in a fight to the death - even if the Elves had had somewhere to run, they weren't going to. 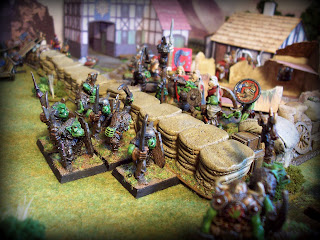 Bagrash looked on at his handiwork and let out a cry of exultation. The archers had some small part to play in the destruction of the hospital, but it was he, Bagrash the Scabrous, who had brought the Elves' stronghold down around their pointy little ears.

Still feeling power coursing through his very being, Bagrash stepped forward looking for his next victim. Of course there was one small bit of him that wasn't throbbing with sorcerous might. The shaman paused to reach down under his loin cloth for a good scratch.

None of his preparations had worked, and he , as educated as he was for an Orc, was running out of letters of the alphabet for each new and improved version. "H" had been the last preparation he had tried to no avail.

Bagrash withdrew his hand and sniffed at his finger, wrinkling his nose in disgust. Then the idea struck him. He looked again at his extended finger and then over to smoking remains of the hospital. His eyes flickered back and forth between finger and charred ruins, mulling the pros and cons of his daring new plan. Finally the old Orc's gaze came to rest on his offending appendage... 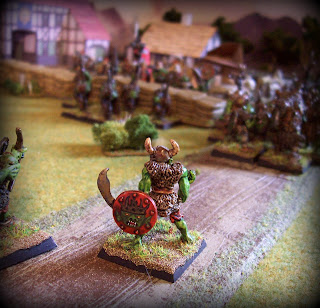 As blackened support beams and scorched fragments of daub rained down upon them, Elf and Dwarf alike dived for cover. 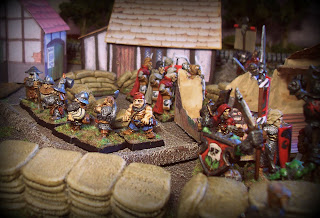 As the dust settled, discipline reasserted itself and archer and sapper once more stood thigh to shoulder.The Dwarf's guarded the approach from the North in their trench and Brommedir split  his detachment to provide all round defence. 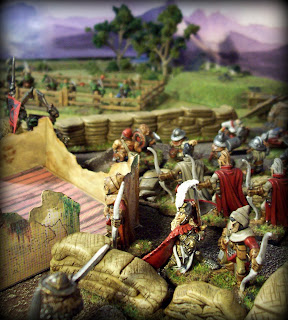 Snart's rescue mission entered its final phase, led by the carts departing with their broken cargoes. Following behind and trying not to notice the substantial gaps they had left in the outer defense wall were the walking wounded. Bertolac and Fernbreth limped doggedly onwards, as did Beli and Gymlet, each doing their utmost to drag along a stretcher bearing a fallen comrade. 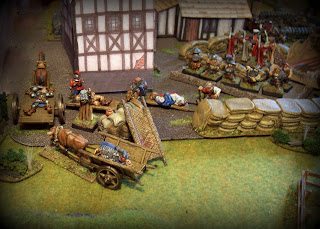 Brommedir, perhaps thanks to his deafness, was a little less shaken than his bowmen. Surveying the scene of devastation, he caught sight of the two Hobhounds bounding over the outer wall, straight for the Dwarf sappers, now ensconced in their trench.

"Look to your front. Mark your target when it comes. Fire!"

His well-trained bowmen weren't far behind their commander and a deadly storm of arrows stopped the slavering hounds in their tracks. 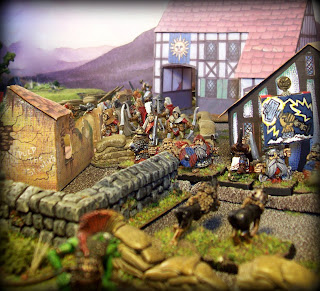 Things weren't quite so rosy for the archers embroiled in the bloody struggle on the outer wall. Orc after Orc clambered over the mealie bags, slowly encircling the hard pressed Elves. One more fell to the onslaught, taking an Orc with him. 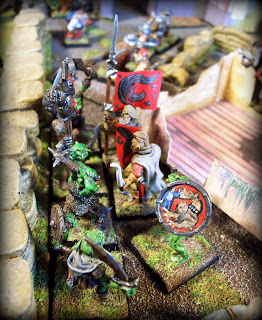 With the clash of steel and the cries of the dying ringing in their ears, Druid Snart and his party finally made good their escape. 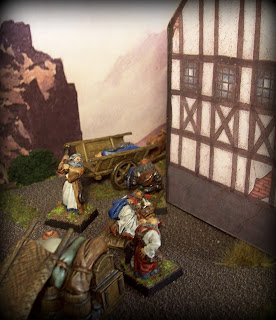 The mob swelled, a multitude of savage faces leered out at them. Crude Orcish blades jabbed and thrust at them seemingly from all angles and one by one they succumbed. One young Elf, on the point of breaking under the strain cried out.

Catching up the standard that fell from the archer's lifeless hands, the last survivor growled,

Sarjen Bouwern lifted the proud banner, resplendent in scarlet and silver, and brandished it in defiance to the green throng that pressed in on all sides... 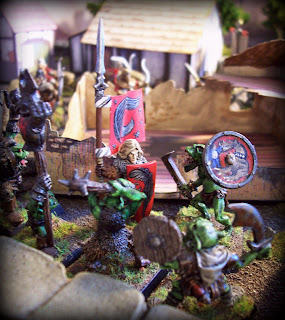 With the destruction of the Elf defenders on the East wall, Magyar Ironfist let out a great howl of triumph. The call was picked up in turn until it spread through much of the Orc horde, reaching an ear splitting climax. Then silence. Slowly a rhythmic clashing began to grow as Orc after Orc rapped weapon against shield. The remaining Elves and Dwarfs shifted uneasily in their positions as the terrible rhythm increased in speed and volume. As it reached fever pitch, there came another great cry and the green tide rushed in. 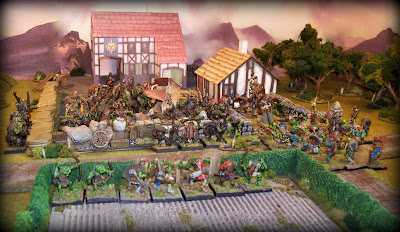 The Orcs charged on all fronts! Ozrim and his engineers felt the ground literally quake as Guthrum Mane thundered into them, closely followed by Grashak Kra, berserk with rage at the demise of his hounds. For one of the Dwarfs, the trench he had dug became his grave, smashed by the enormous glaive wielded by the giant. 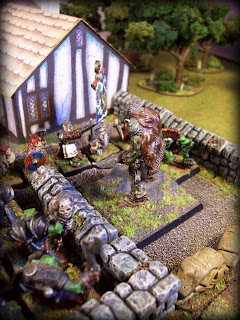 The sappers at the main entrance came under increased pressure as the second unit of Kwae Karr Orcs charged in. Despite the weight of numbers against them, the Dwarfs were well protected by their trench. 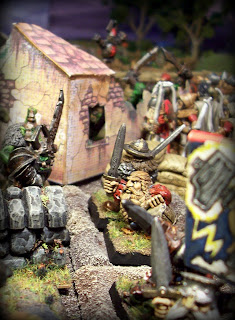 Magyar's victorious Orcs pressed on through the smoldering ruins of the hospital, charging into Brommedir's small detachment. The Elves, with typical discipline, stood firm and snapped off a quick volley at their attackers. Somehow the Orcs came through it unscathed. 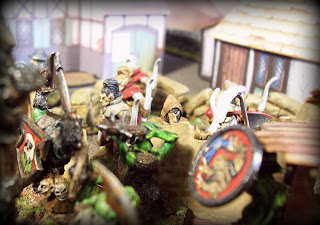 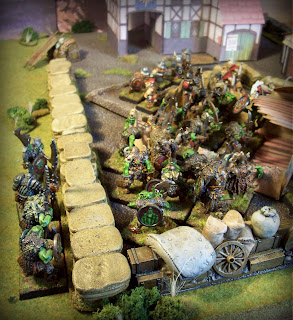 As the other detachment of archers dashed over to join their comrades, one Elf fell to a well placed thrust from an Orc sword. Buoyed up by the reinforcements, the archers fought back dispatching one of the brutal creatures. 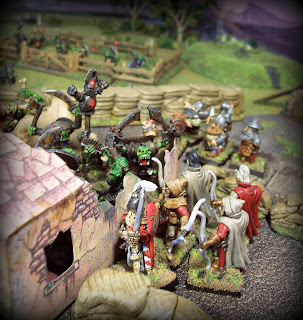 The desperate struggle between the Hill giant and Chardz' sappers ground on. Guthrum Mane's ill coordinated attacks were easy enough to dodge in the trench, yet the Dwarf's couldn't land a penetrating blow on their tough adversary. That is until Guthrum, mad with hunger and frustration, jabbed down into the ditch, skewering two unfortunate engineers. 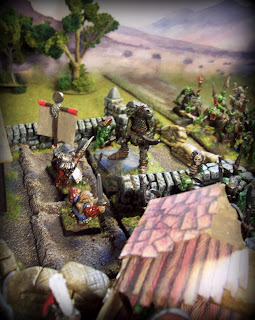 The Severed Hand Orcs joined the fray, charging the Dwarf sappers who stood in their way. One Dwarf fell to their great axes for the loss of two Orc warriors. Sneaking slyly up behind, the F'yar Guard continued their flanking move. 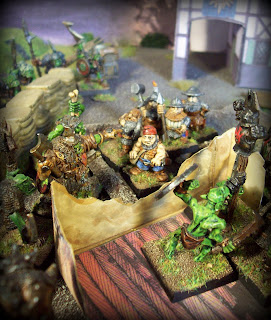 Calling out encouragement to their Hill giant, the Vile Rune Orcs edged forward, waiting eagerly for a gap to appear in the defences to exploit. 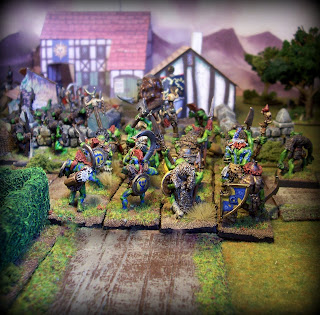 The situation was desperate. The compound was rapidly filling with Orcs as they poured in over the uncontested outer walls. The defenders found themselves beset on all sides, hemmed into their central redoubt by the screaming mob. The air was rent with the clamour of battle and the cries of the wounded. Over all this came the voice of the new Orc King,

"Who dares face me, Magyar Ironfist, King Killer, Crusher of the North and Scourge of Ramalia?"

Aydendorn nudged his commander furiously, lest it be him who was mistaken for the Grand League's Champion,

"I think he means you sir!"

Before they lost any more face in delaying answering the challenge, Aydendorn took matters into his own hands. With absolutely no thought for his own safety, he span the unsuspecting Brommedir round and bravely propelled him towards the waiting Orc.

Losing his footing as he stumbled forward, Brommedir found himself hurtling straight towards an enormous and very angry looking Chieftain. Unable to stop himself, the hapless Elf blundered straight into his adversary, silver helm connecting with Orc skull.

Not exactly expecting his challenge to be met in such a manner, Magyar staggered back in surprise. Brommedir had no problems hearing the great Orc's snarl of anger. The tumult around them seemed to fade away as they circled each other warily, looking for a chink in the other's guard... 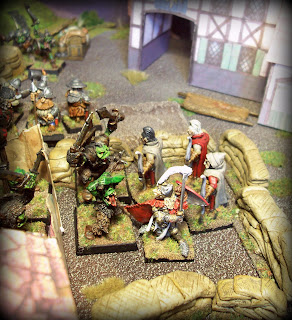